What is so special about this example?

All the physics (MatterJS and Arcade) is entirely calculated on a NodeJS server. The client only received the positions {x, y} and other necessary properties like rotation, animation and tint of each object.
It uses a unmodified Phaser 3.16.2 version from npm.

You can play the example here.

It runs on NodeJS on Heroku (Free Dyno in Europe) which causes the example sometimes to take about 1 minute to load.

Here is the link to its GitHub repository.

I really hope you

it and can use it in your own projects 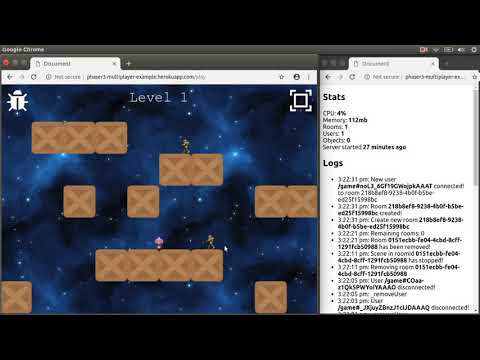 How do you plan to use this on the server-side?

The physics is entirely calculated on the server. The client only gets the coordinates {x, y, rotation}. This is why you will see the same boxes at the same place with the same rotation, regardless where you are in the world.

after reviewing … I think I’ll … read my own book and follow my own research!

What started as an simple example, is now about to become a really funny co-op game.

The goal?
Simple! Just catch the huge blue star.
But, you have to work as a team to get it!

Thank you so much for making this! I’ve managed to get to the second row of stars, but no luck with the big guy yet.

I’m working on a project which will hopefully be built on Phaser and Matter, but I haven’t yet started my networking tests. You’ve not only shown me that it’s possible, but also that it performs acceptably on mobile which has eased some concerns. I don’t want to derail your thread, but if you could answer some questions for me I’d appreciate it a ton. If they’re too off topic I can shoot you a message.

Sorry for all the questions! I appreciate any help you can give me in determining if this tech will work for us. Thanks again, and great work.

I have also only caught the big star twice. It works best in a team, putting 3 boxes below the star and then jump on each other to catch it.

I can totally recommend you this approach for a real-time multiplayer game. I works great. Currently I’m about to program a RoomManager which will manage multiple socket-io rooms and create a new Phaser instance for each room (all in the same nodeJS app). I will also add a /stats url, where you can see stats about the app’s cpu and memory usage and its logs.

For now, the game (same link as in my first post) creates a new room for each 4 players. Open 5 browser windows and you will see that the 5th player is alone in its own room (Phaser instance) and it shows its own public room id in the debug text.

I know that I wanted to publish it earlier, but I prefer to add all these great features first

I have now added the page /stats which logs all console.log()'s and some usefull information about the game, cpu and memory. Also check out /physics if you have not yet.

This example is currently running on a free dynon under Heroku, so the URL may change in the futur.

Haha! I was just playing with someone random and we got the star! Whoever you are, if you see this

Thank you so much for the detailed reply Yannick! You’ve helped a ton. I’m going to continue along down this path and see where it leads us. That stats page is also incredibly awesome, so thank you for that as well.

I wish you the best of luck on this project, and many more to come. Hopefully I’ll be able to help you in turn some day.

Glad you got the huge

Thanks, it helps a lot seeing people like my work

Best of luck also to you. Hope you can build a great game based on this example.

The example with MatterJS is now more or less finished. I’m now about to implement Arcade physics, since most do know this better and it is much easier to use.

In the finished example, the client will be able to choose which physics engine he wants to use in the game. Its cool and it demonstrates how you can start multiple Phaser instances with different scenes and physics based on what the client chooses.

You’ve gotten Arcade Physics to work with Node? After a good amount of research, it looked like Arcade couldn’t be decoupled from the Phaser core and this was thought to be a bad idea.

I would LOVE to be able to use arcade, but networked gameplay is a requirement for us. Are you running phaser headless? Or have you managed to decouple the physics system completely?

I’m about to add a platformer game to this example with arcade physics. I just need to add some stars and some enemies.

I’m running it in headless mode.

I’ve uploaded the latest version to the server. Take a look at the links below.

Thank you very much! This is simply awesome

Are you using a NodeJS library ? Such as :

Can’t wait the link to the github repository

No, none of them. Did not even know they existed. This is the first time I make a real-time multiplayer game.

I simply use express and socket-io and programmed a own RoomManager. It is very easy to make. You will see.

I think it became really nice

Let me know what you think!

I thought a lot about your question “Have you done anything special to account for tcp?” And how, I finally have a good answer. Please take a look at topic #2080.

That’s such a nice example. I’m really glad you published it on github.
I’d like you to elaborate or guide me on how is your webpack/nodemon configuration working. I have some questions:
· Running “dev” will get webpack to recompile and nodemon to restart? Isn’t it too slow to recompile before each restart? Just asking, because I never done this myself.
· With auto recompiling + auto restarting you just refresh the client page and voila, server with changes are being used?
· What’s the reason to separate physics and stats in different webpacks?

– EDIT –
Extra question, is it really worth it using webpack for a project made with JS? I’m using ‘use strict’ in my server code and type=“module” in my client for ES6 modules.

Glad to see you’re still working on this! I’m going to respond in your new topic, but I don’t want to clutter it up with potentially unrelated stuff so I’ll ask here.

What were the issues you encountered with this project that pushed you to create the UDP library?

Thanks for all of your hard work!

Isn’t it too slow to recompile before each restart?

Yes, it is slow. But you can tweak the webpack configs to improve it. If I would work on a large project, I would probably use webpack-dev-server to serve the /client, /physics and /stats over it, instead to serve it over the node server like in production. This will retranspile the code and restart the browser immediately. Also I would configure the /server to retranspile and restart via nodemon, only if a file needed by the server has changed. This will make development much easier.

What’s the reason to separate physics and stats in different webpacks?

Only for readability. You could of course merge them.

Extra question, is it really worth it using webpack for a project made with JS? I’m using ‘use strict’ in my server code and type=“module” in my client for ES6 modules.

Yes, it is worth it! Since you can use ESNext syntax or TypeScript. Btw I’m using TypeScript in this project.
Please take a look at a starter template. It uses webpack and does a lot of work for you. You will see that it opens many new possibilities and it is just much easier to develop with it.

What were the issues you encountered with this project that pushed you to create the UDP library?

So I decided to make it work over UDP. I have built the core for my library by now. Now I’m about to build a nice user-friendly API for it (It should look similar to the one of socket.io). After that I will build another Real-Time Multiplayer Game with my new library and publish it in this forum